In the morning, we took the water taxi back to the airport and prepared ourselves for the crazy driving that I have heard so much about. After making the drive to Ferrara, I realized that the drivers aren’t any worse than those in New York; maybe there’s a connection. Either way, by the time I finished driving in Bologna I started to have fun.

After chatting with a couple last night in Venice, they told us about a salumeria in Bologna that we had to visit. Once we arrived, we set out to find the greatest cured meat in Italy. After 30 minutes of exploring and trying to find the piazza, we ran into the most beautiful retail store I have ever seen. Numerous amounts of prosciutto, dried cured salami’s, and lots of cheese covered the front window of the salumaria. I was “a kid in a candy store”, my mouth started to water and I suddenly felt very hungry.

We wandered around, looking at different menus for dinner and ran into a little bar where we enjoyed a beer and a small plate of appetizers and olives. One thing that we noticed was that all of the bars are holes in the wall;they are small little rooms with chairs set up in the alleys for seating. Once we found a restaurant for dinner we enjoyed fromage and salumi as a starter. The salumi consisted of sopressa, mortadella, and of course prosciutto. The fromage had two types of parmesan, a nice soft cheese that spread like warm butter, a firm sheep cheese, a blue, some honey, and a little balsamic. The entrees were not nearly as good as the previous course; my tortellini tasted great but were drowned out by balsamic and the veal bolognese was very thin and boring, but the potatoes were very good. My interpretation of bolognese is a little different so we will try another restaurant tomorrow.

What you get served with beer: bruschetta, olives, and crackers.

Pumpkin tortellini with balsamic and bacon.

11/3
Our first sit down lunch in bologna was great. I had to pass up the meat sandwich, but it was worth it. Instead, I had Bufalo mozzarella con crudo di Parma, or fresh buffalo mozzarella with Parma ham. It also came with arugula, olive oil and fresh cracked pepper. Scott had lasagna alla bolognese, whiched looked just as good and was more of the traditional bolognese that I was used to. Both meals hit the spot and now it’s nap time.

Tonight we are going Da Cesari, a Michelin rated restaurant, that looks incredible. 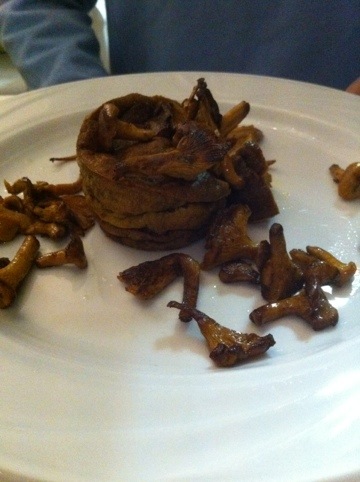 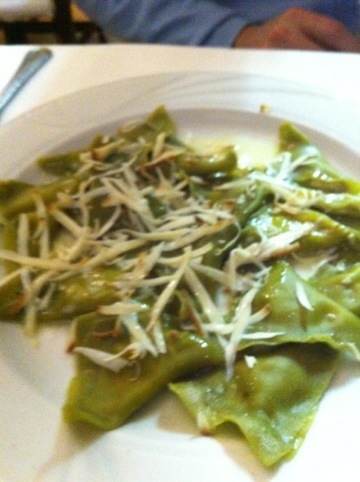 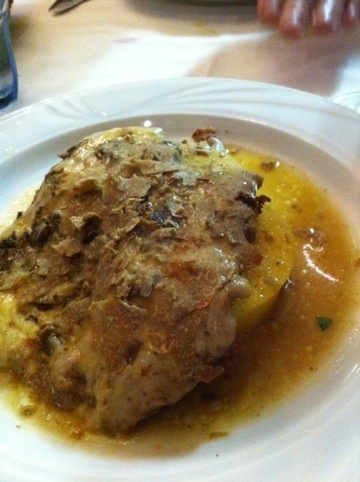 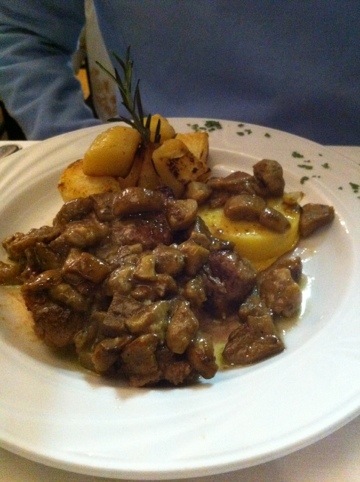 Filet of beef with roasted potatoes and porcini’s.

My impressions of food in Bologna: they call it the “Fat City” for a good reason. There is plenty of food, lots of fresh tortellini, fresh mozzarella, and cured meats. I would say our lunch was the best meal, and would advicse that just because a restaurant is the Michelin guide doesn’t mean they are good. Not that the food at Da Cesari was bad but it lacked flare. It was the same food that the other dinner restaurants offered and nothing more. All in all, the food was good and the best part about this region is all the fresh cured meats.

The greatest WordPress.com site in all the land!

Cooking with passion for fun!

A Lifetime of Culinary Adventures

Memories, photos and tips from a true foodie

What's new in our world of music

Learn about Goan and Indian Recipes