I doubt that you will find anything like this in “One Hundred Ways of Cooking Eggs“, a book originally published in 1892 by a chef with 25 years of experience, but I came across this gem of an idea in a magazine, Art Culinare about a year ago, and the base of the recipe was salt sugar and black pepper. The first time I made it I added fennel and realized that the egg yolk can pick up flavors very well. The finished product is firm, can be grated with a micro-plane, and it has a nice fatty richness that is full of flavor. I was blown away the first time that I made it, so much, that I had to make another batch. It is very simple and quick to assemble but it does take five weeks to cure, after it has been cured it can be held for a few weeks and used when needed. Cured egg yolk is best when shaved on salads or on top of fish, it is rich and heavy but the flavor is delicate. 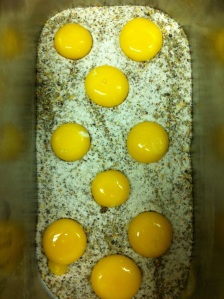 The last time I used the cured egg yolk was on a bone marrow salad.  This batch of cured yolks have a nice fennel flavor, the pepper wasn’t as strong in terms of spice but you could taste the flavor of the pepper.

The greatest WordPress.com site in all the land!

Cooking with passion for fun!

A Lifetime of Culinary Adventures

Memories, photos and tips from a true foodie

What's new in our world of music

Learn about Goan and Indian Recipes